The house that Jack’s mom built 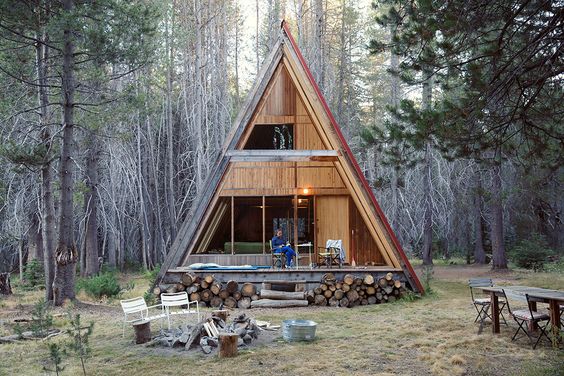 I’m always dreaming up house plans. If I actually was in a position to build my dream home, I would have a heck of a time choosing THE plan. There are just too many. I drew up three floor plans in just the last two days and now I have two folders of house plans, all in various stages of development. As I was going through my folder I found a house I designed last year. It’s a house for my son Jack. You know, because my 2-1/2 year old needs a house right now. I’m telling you, I have houses for everybody. I’ve got my husband’s lake house, my city Victorian, my country Saltbox, a tiny house for my sister….

If I could, I would build a house for all my children. Buy them a car? Not sure. Pay for their college? Maybe. But design and build them a house, yes. The house that my husband’s grandmother grew up in had the name “Mary” written in the brick above the fireplace for her mother. I love that; that a house can take on a name and be uniquely designed for a special person. (Sadly, that house and that fireplace was torn down a few months back).

For Jack, I was thinking a modern A-Frame cabin in the woods, with some hints of German architecture to connect back to his roots. As I designed it, I thought about what a young guy would want—rustic wood, moody colors, vaulted ceilings, wood burning stoves, industrial hardware, a small music studio to record an album, of course. Clearly, I have concepts of who Jack will be when he grows up (which I realize isn’t probably healthy), but since his version of a dream home right now is a teepee fort in his room, I think I’m close with the A-Frame idea. 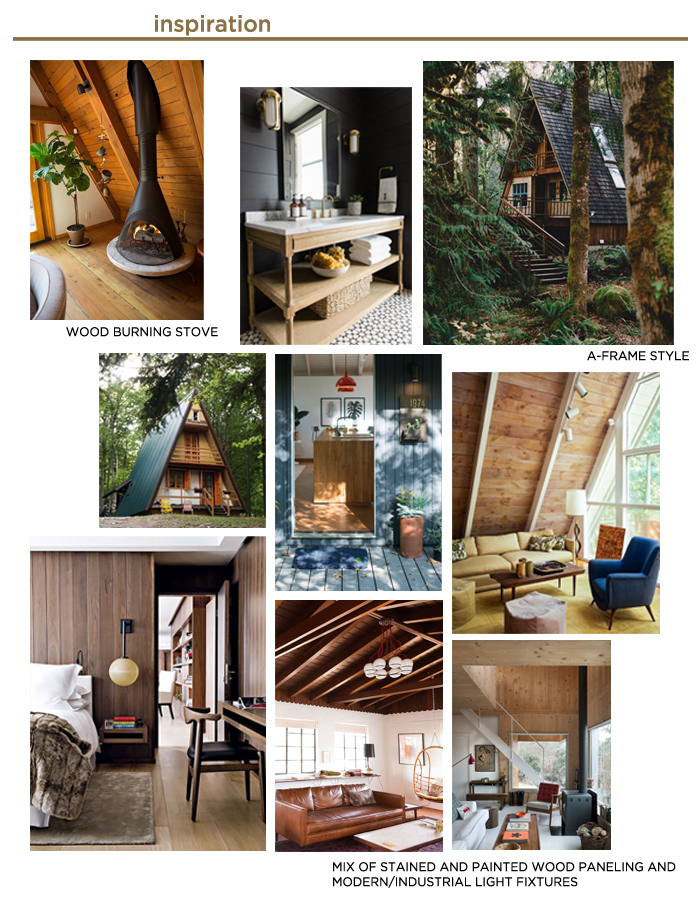 The roof line definitely adds drama, and I like the idea of the house feeling a bit like a treehouse, with vaulted ceilings, skylights, lofts, and various balconies. The materials would be a mix of wood, steel, and glass.

Here are the sketches I recently pulled out of my folder. This is the front elevation: 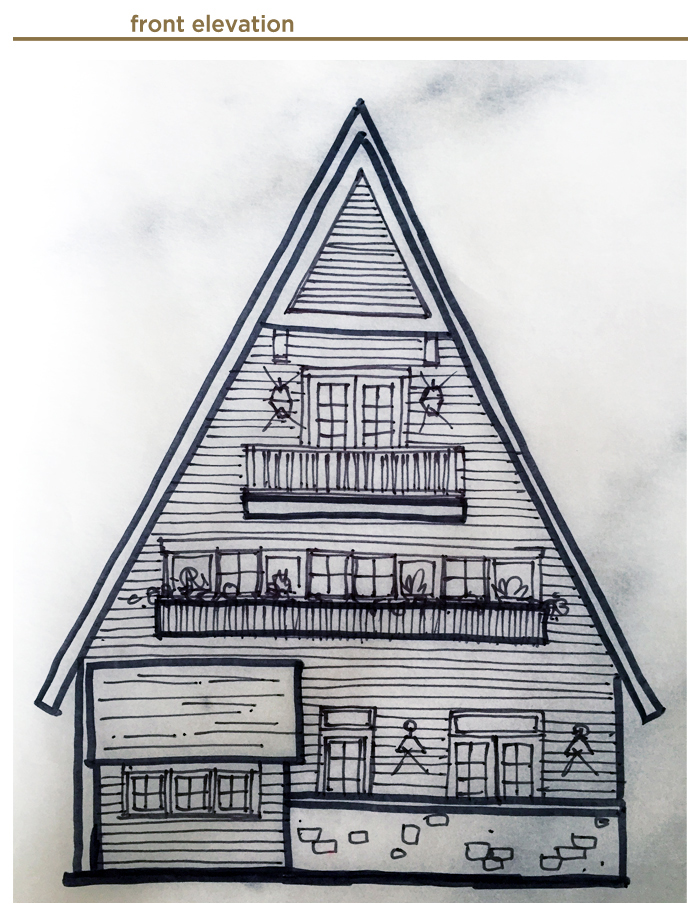 I think it could either be a mix of stained wood with painted trim, either red-orange or deep green, OR it could be painted all white with some stained natural wood accents. Totally depends on whether it’s in the mountains or on an island.

And here are the floor plans. I’ve got my room picked out, Jack, so be ready for mama to come visit. 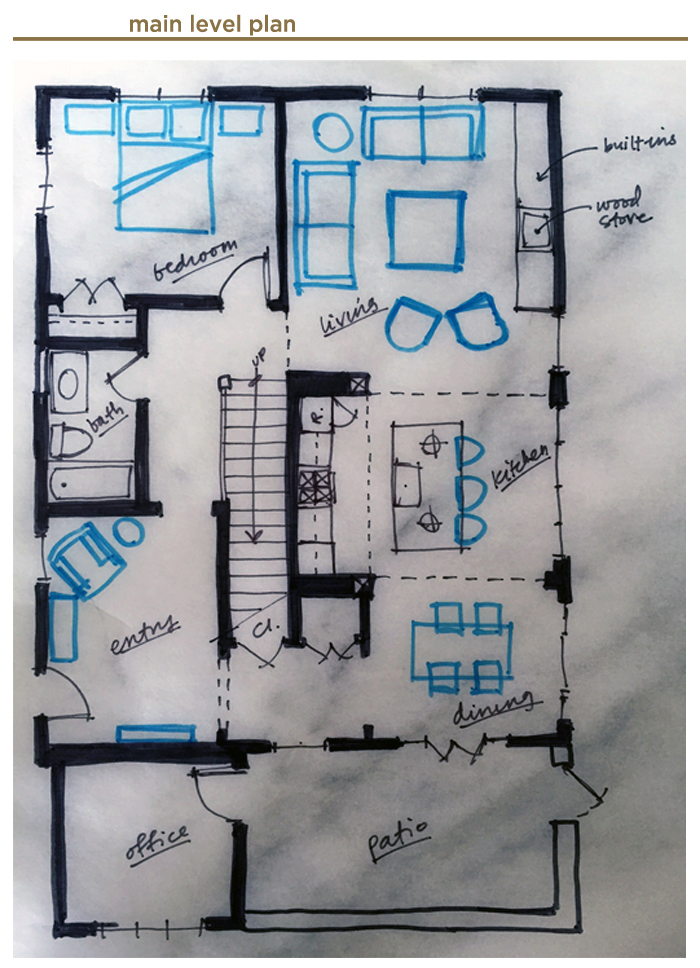 There are so many features that I love about this plan. There’s an attached small office, yet it feels separate from the main house. I imagine the patio could be a really cool outdoor space surrounded by a low stone wall and lit by string lights above. The kitchen has a vaulted ceiling that goes all the way up all three floors. You can see down to the kitchen from the center flight of stairs, and from the second level loft. I also imagine skylights on this part of the roof over the kitchen, filling this space with a lot of natural light. 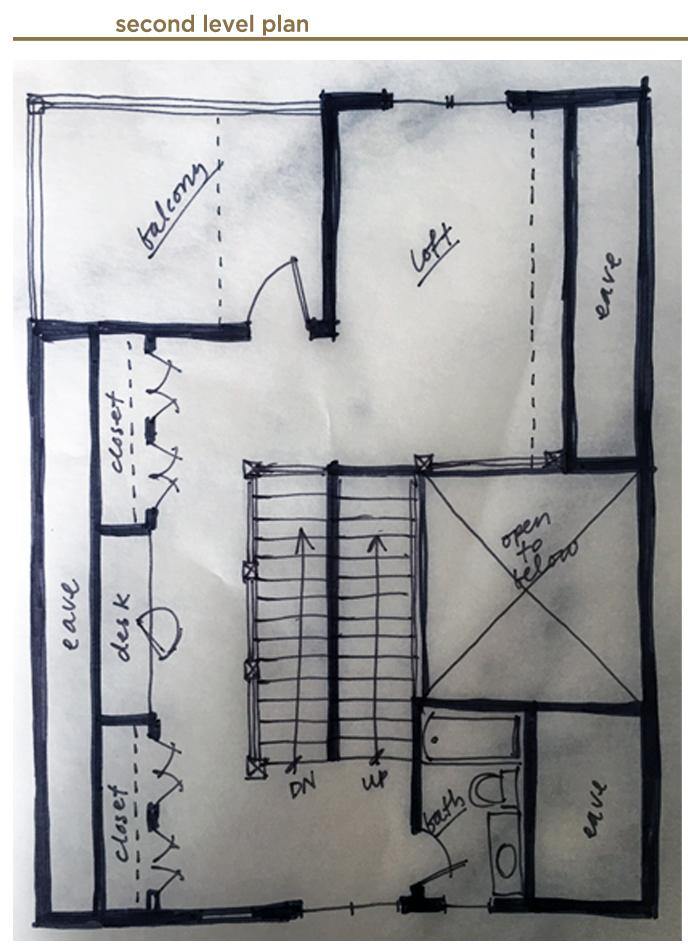 The second level has a loft space that could be used for sleeping, working or hanging out. There’s a covered porch/balcony too. 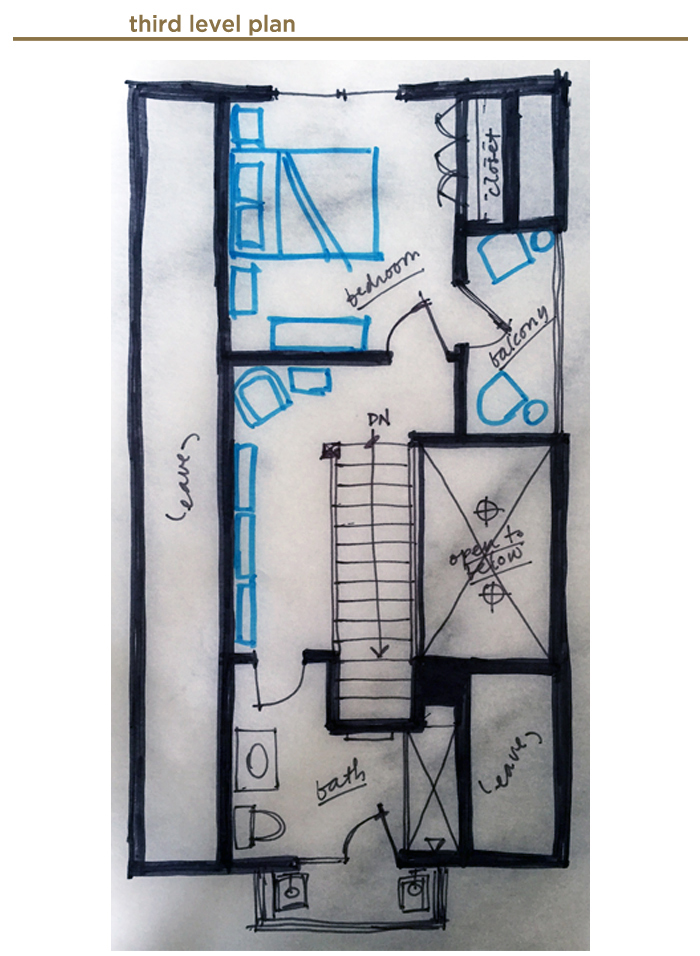 The third level is kind of magical since it feels most like a tree house. I would imagine Jack would elect to take this bedroom as his. The ceilings would have that steep, dramatic A shape, and there are a couple of small balconies; perfect for one or two. Jack, if there are two, please introduce me. 😉

And as I am typing this, I turn around and Jack has literally just built his own house. 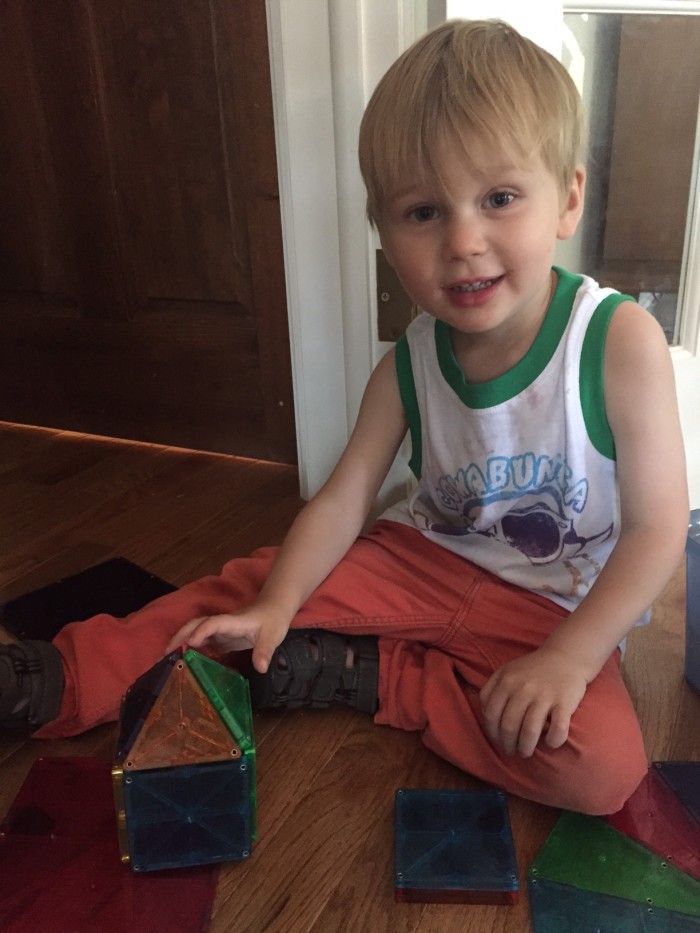