3 In My Home/ The Renovation Project

Step inside the new bathroom—35 square feet of simple, classic design with a healthy blend of new and old.  This isn’t just a new bathroom; it’s an additional bathroom. For the first time in our twelve years of marriage we have more than one bathroom. It’s a big deal for us. Advice for you newlyweds: A key to a strong marriage is learning to successfully share a bathroom (and by bathroom I do not mean spacious master suites with double vanities and separate water closets). Do that and you’re golden. Consider the moment you unclog your first shower drain together as a marital rite of passage.

Ok, ew, let’s get back to the pretty bathroom. So it’s small—it’s 5′ x 7′-6″—as we had to make it work within our existing floor plan, but it’s totally practical for a secondary bathroom. It has a standard layout: 30×60 tub/shower, toilet, and sink all on the plumbing wall, which is basically the most space-efficient and cost-effective arrangement there is for a functional bathroom. The goal was to squeeze an additional bathroom into our little house on a limited budget, so bargain-shopping was necessary. I did splurge on a few items, like the tub faucet, light fixture, and floor tile to give the space some personality. I intentionally mix and matched finishes on the hardware and designed a storage built-in on the side of the sink to add extra function and character to the space. Yes, she is really small and simple, but the final touches went a long way. 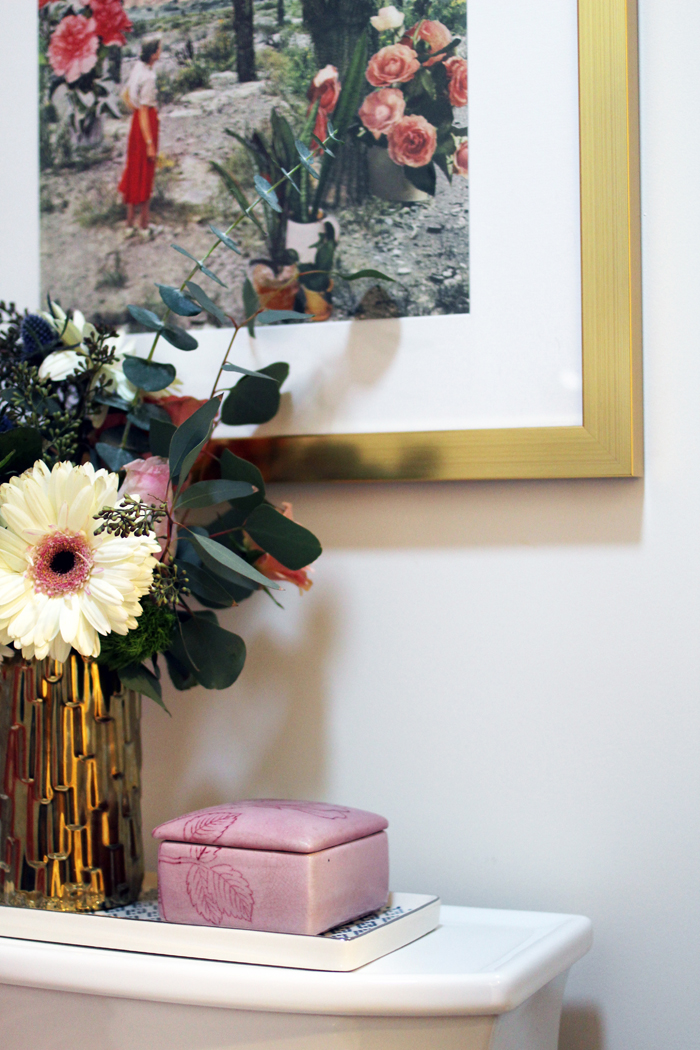 We saved money—like hundreds of dollars—on the big ticket fixtures. The sink and toilet were off of Craigslist, and the tub/shower insert was $125 at a salvage store. The door and door hardware was re-used from another part of the house. 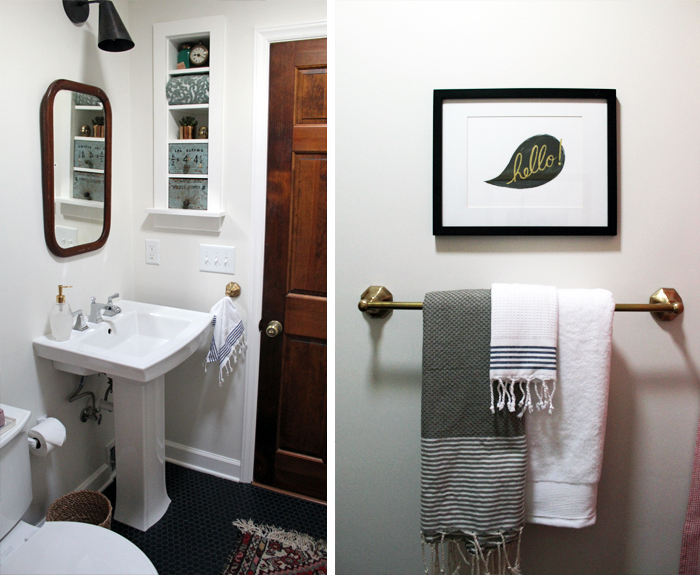 There wasn’t a good spot for a towel ring near the sink, so I just installed a robe hook next to it for hanging a hand towel. It works great. It matches the towel bar and is a brass finish as opposed to the chrome on the plumbing hardware. I think mixing finishes is an easy way to add interest to a space. I like things from the past, so a number of the items are vintage like the 1920’s oak frame mirror, the rug, and a couple of old hardware store drawers that I repurposed for my little built-in. 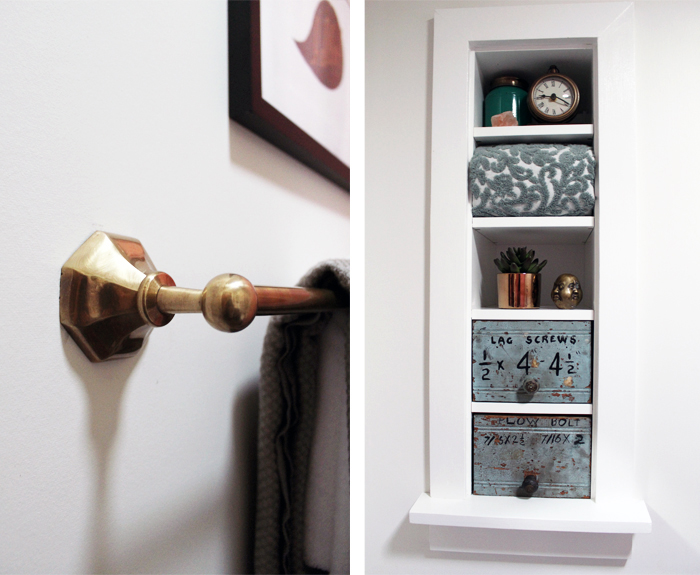 They drawers work great for storing extra soap, rolls of toilet paper, and hand towels. And lag screws and plow bolts too, evidently. That’s actually an 9″wide IKEA cabinet that we built-in and framed into the wall. The little antique drawers fit perfectly and add some extra texture. I’m so happy with this little feature, and I actually think it works better than a vanity cabinet. Fortunately, this bathroom doesn’t require a lot of storage. 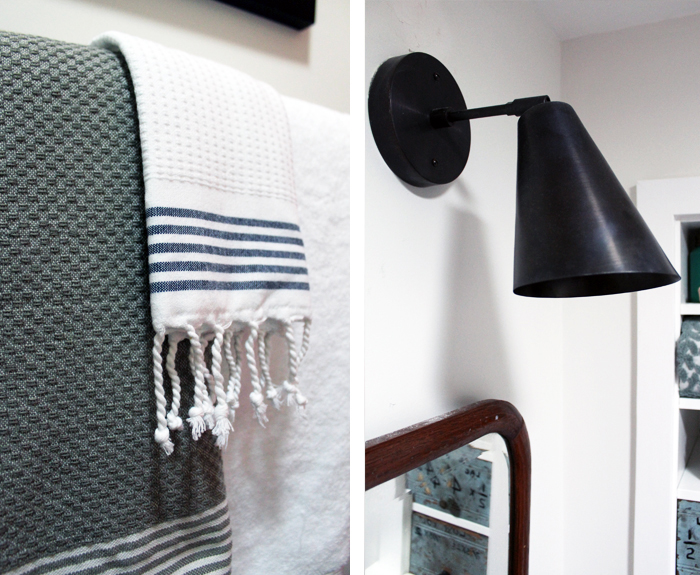 I struggled a bit with finding a light fixture. Ideally I would have two sconces on either side of the mirror for the best light quality, but in the end I elected on a single sconce above the mirror. I strive to find architectural fixtures like lighting that are handcrafted in the US and ultimately landed on this great tilt-cone sconce made by Cedar & Moss in the pacific northwest. I like that it’s finish resembles the dark floor. 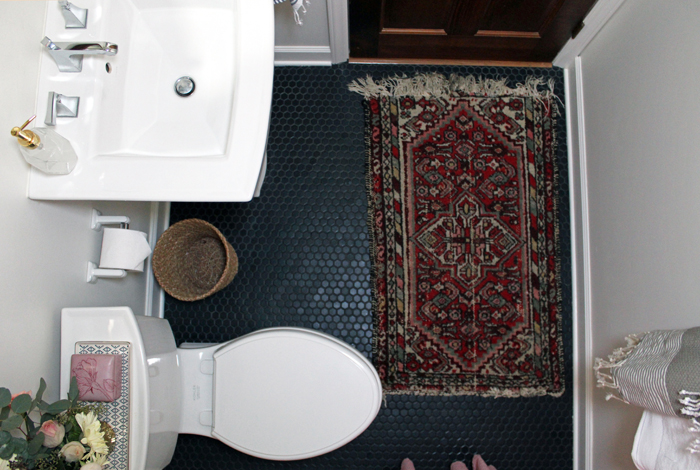 As someone who loves classic design, I had to go with a hex tile. I love the possibilities with that simple shape. If this were a larger bathroom, I would have experimented with a pattern (maybe one of these), but for this bathroom I easily landed on black with black grout. It contrasts with the white fixtures and I especially like that it hides dirt! 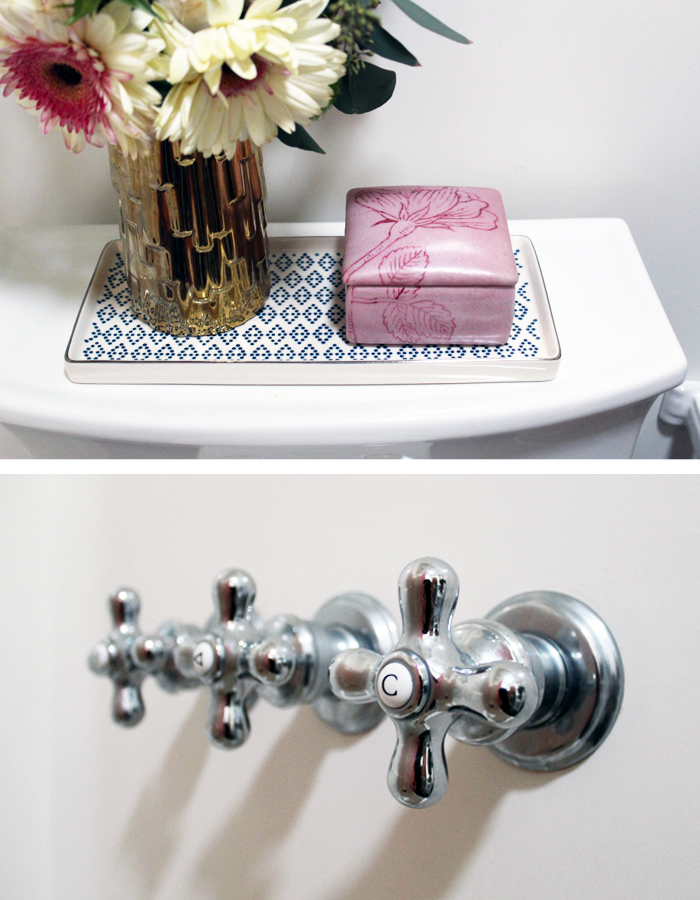 The tub already had three holes pre-drilled for the valves, so I had no choice but to find a three-handle shower faucet. They aren’t easy to find, but as shared in an earlier post, I found a few that I liked and chose this one by Pfister. 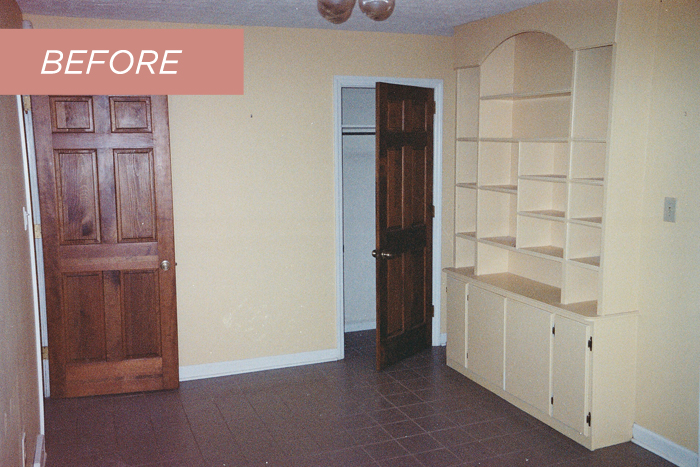 The new bathroom went into the left side of this space. See the floor plans here to get a clearer picture of the arrangement of things. When the house was built, this 11×11 space was originally a third bedroom. The previous owners converted it into sort of an office space that connects to a sunroom addition. We took this picture when we first bought the house in 2007. 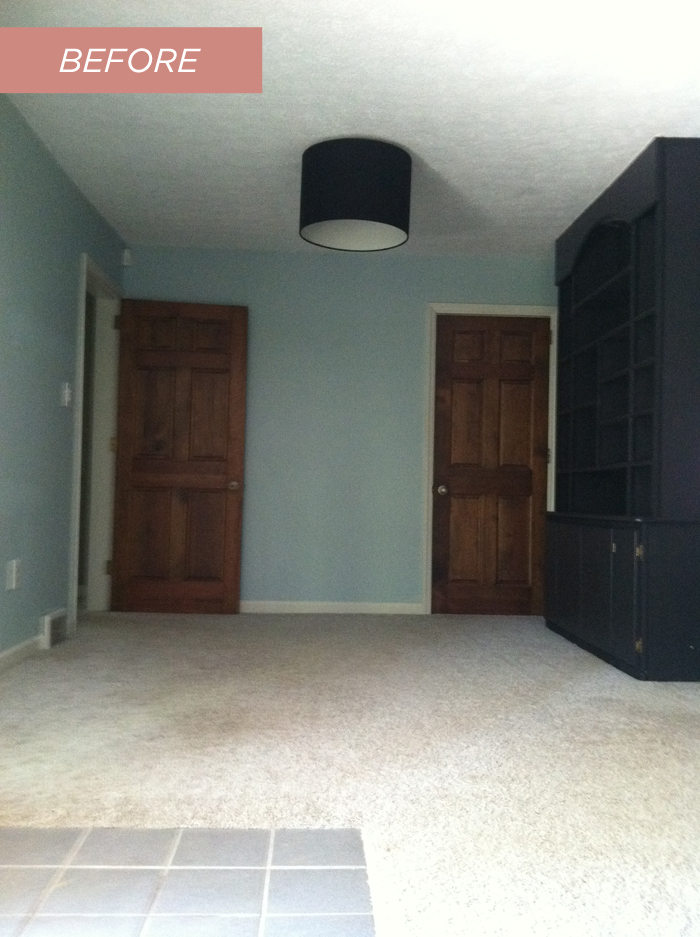 This is another “before” shot of that space from a few months after we moved in once we did some simple cosmetic changes. Below you can see where this new bathroom ended up. It makes a lot more sense in plan view though. 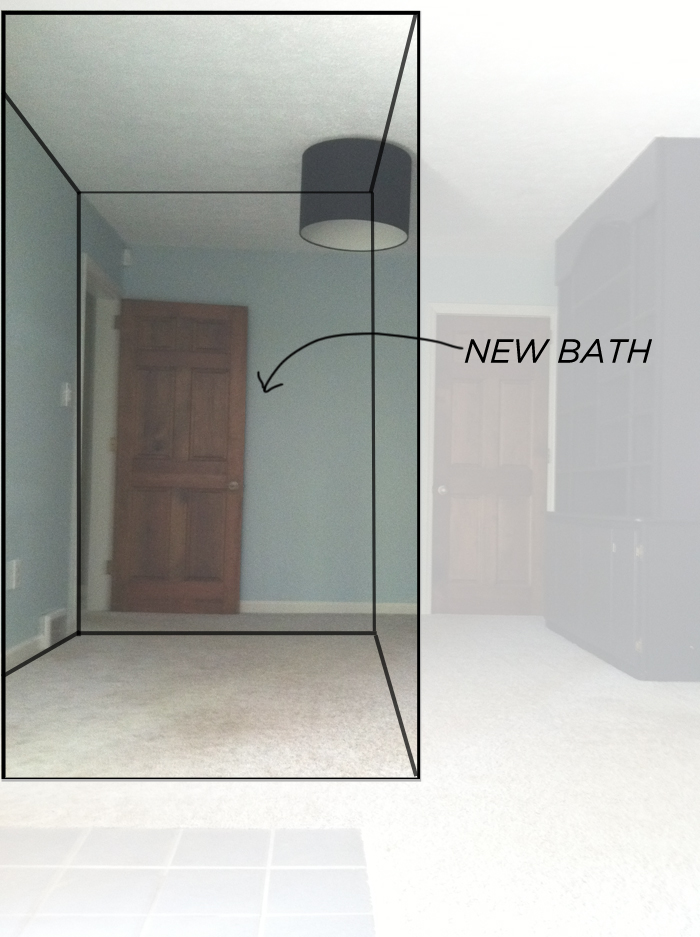 Kind of crazy what all can fit into that little box, huh? 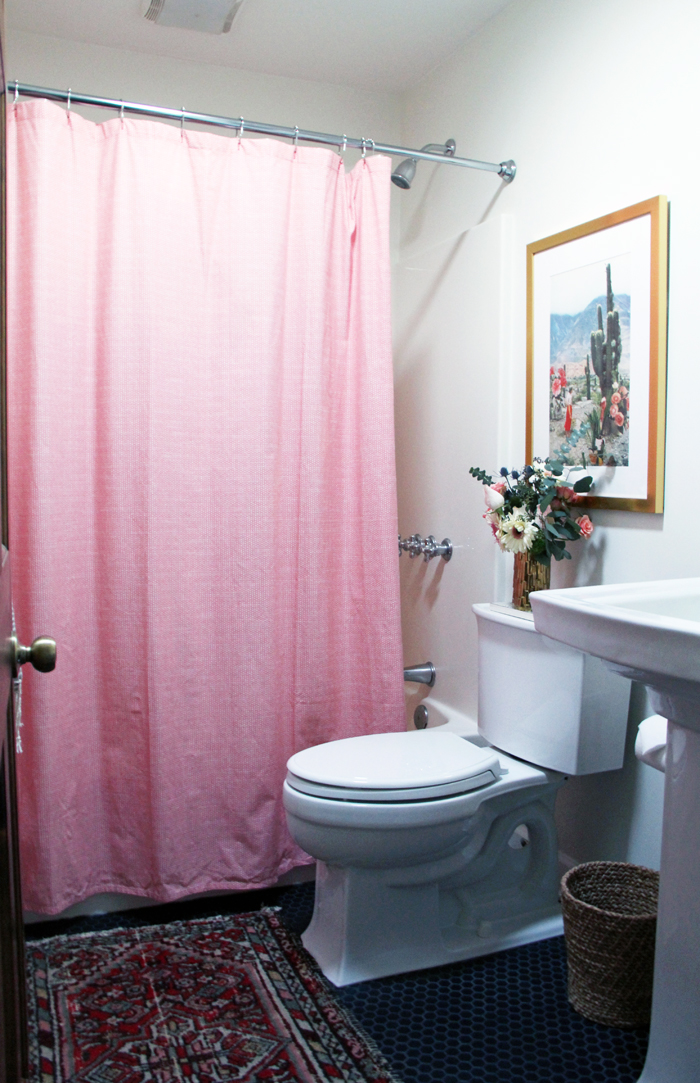 With this renovation, we lost that office type space, but honestly it wasn’t a great use of space to begin with. Now we have gained another bathroom plus a linen closet, a pantry, and another hallway with more built-ins. And the office is now just in the sunroom. So it’s been a huge win. I’m so thrilled with this improvement. 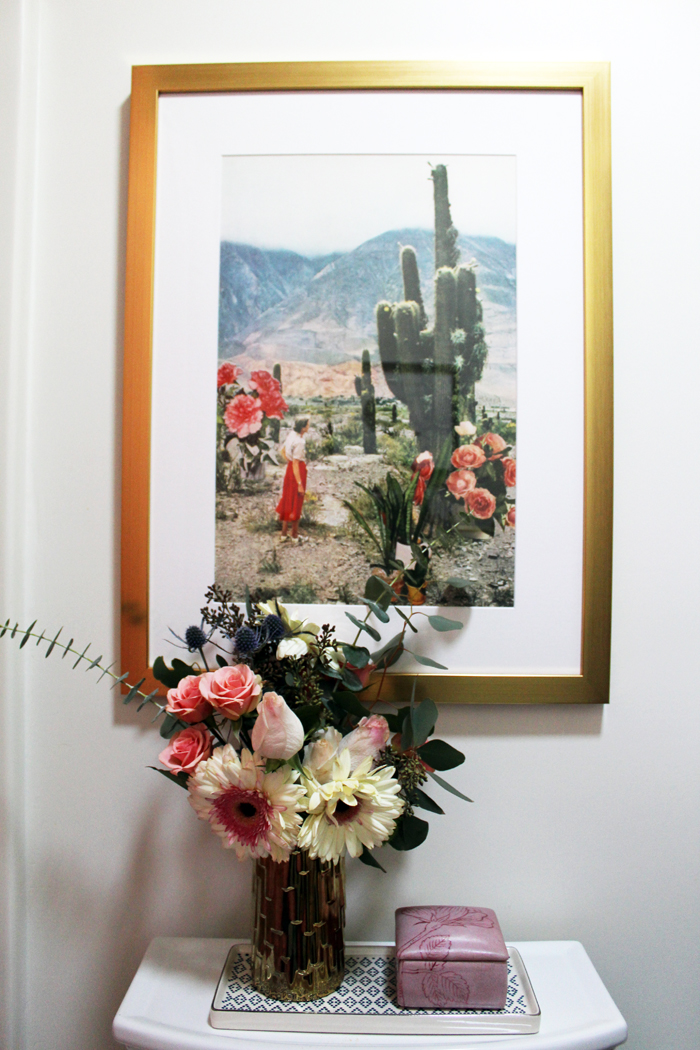 A reality with this plan was that I would not get a window in this bathroom. It’s not my first choice to have a room without some type of window, but fortunately I could at least get some natural light with a skylight. We picked up a solar tube at Home Depot. Nothing fancy but, WOW, it adds a ton of natural light. Believe it or not, all these pictures were taken using just the light provided by this source. 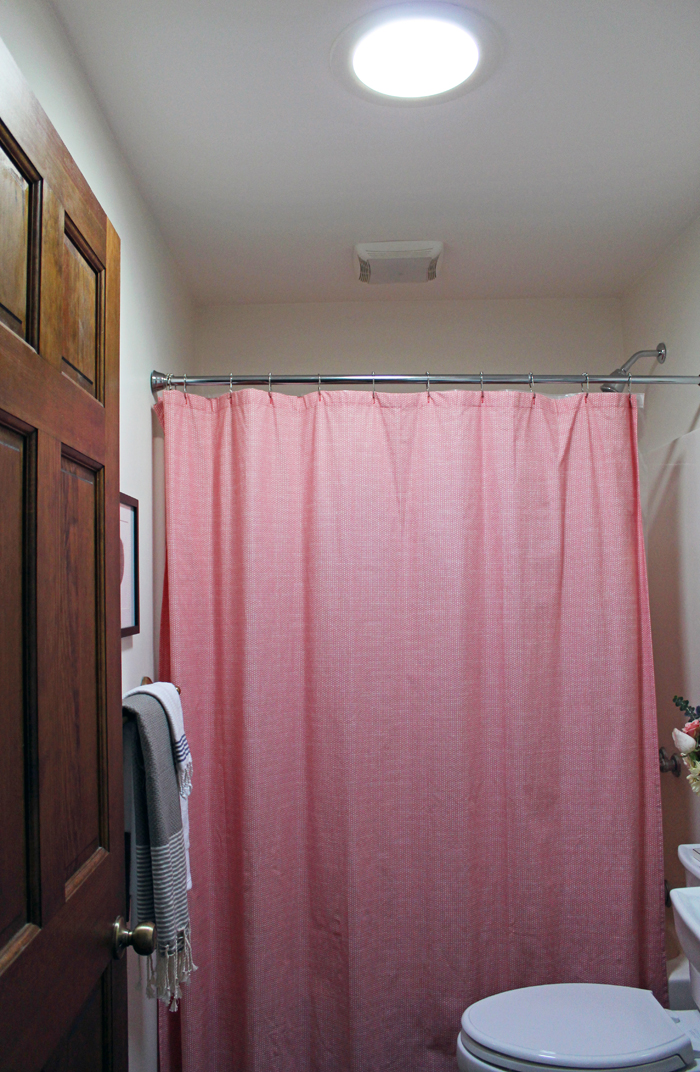 It’s basically a reflective metal tunnel that goes out the roof. This is the post that shows that scary moment we cut a hole in our roof. So far, no regrets and no leaks. 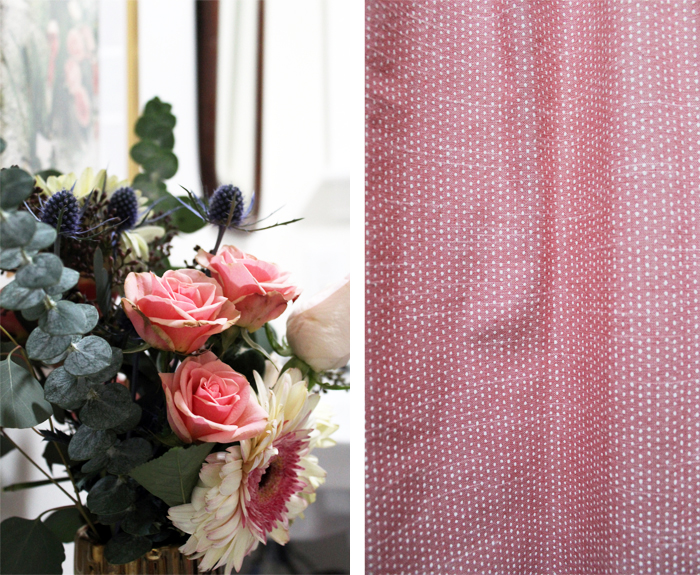 So, there you have it. My affordable new bathroom that, oh-yeah-by-the-way, took us a freaking year and a half to complete. We learned a couple of things like don’t do drywall yourself (it’s not easy nor fun, and we have a lot of imperfections to still patch up) and tension shower rods will drive you nuts, but for a bathroom that we did ourselves with the exception of plumbing and electrical, we’re pretty proud of our accomplishment.  Next up is the adjacent hallways, kitchen, and pantry. And I’m hoping we’re faster with this next phase.

I’ll leave you with the run-down of resources. Happy Wednesday everyone! 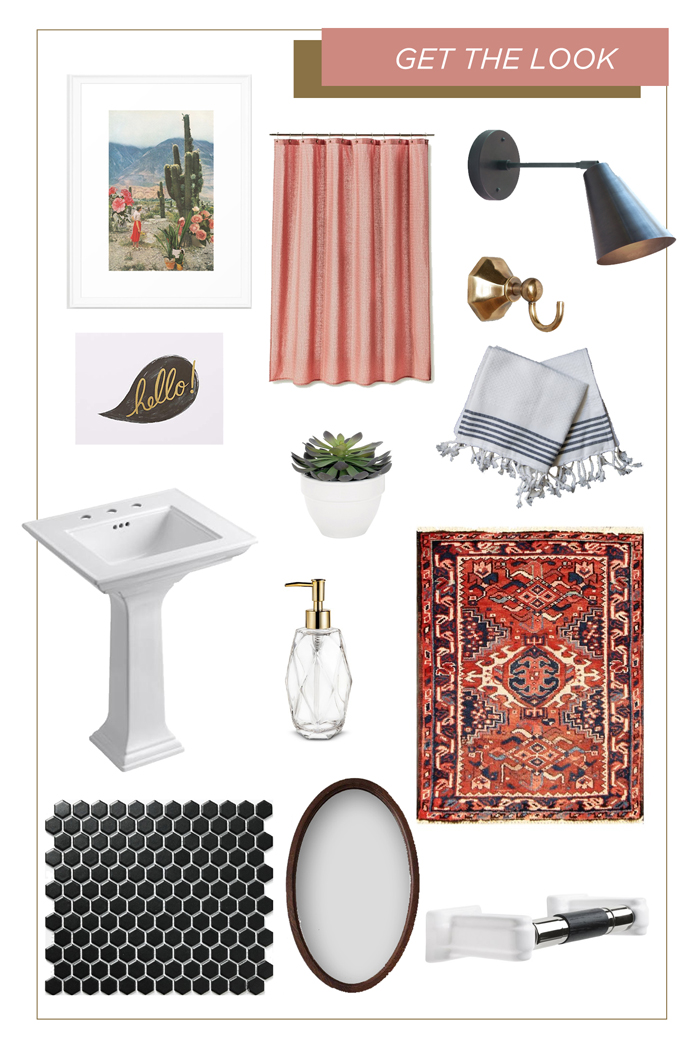 More posts about our project: The Renovation Project

Project Update: The design change that will save us lots of money

A color palette for the whole family