0 In My Home/ The Renovation Project 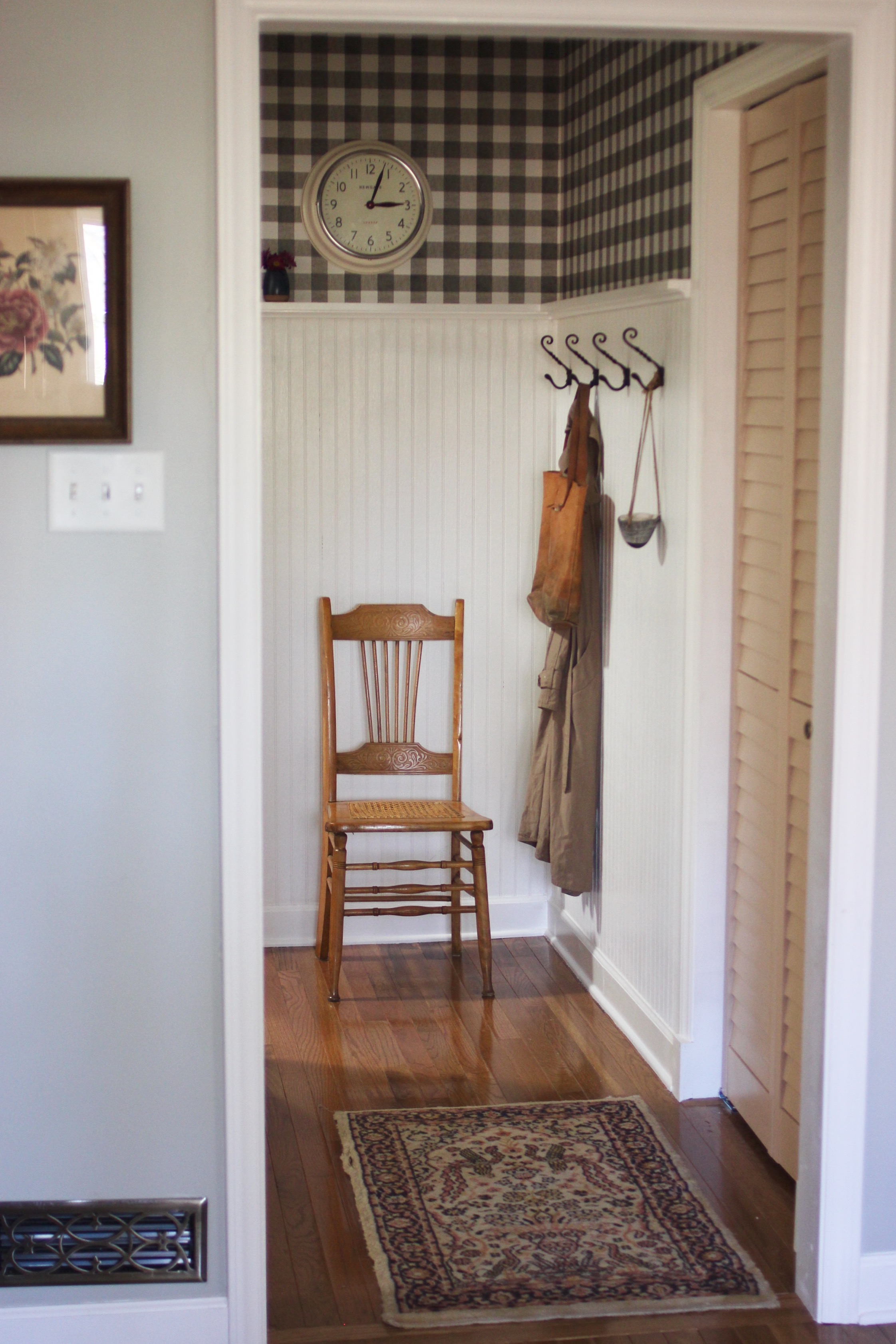 If you think about it, hallways are like roads. Some are long, narrow, and efficient, and some are a bit more scenic. We prefer the back-roads when we drive around town because of their unexpected twists and views. When we added the second bathroom to our house we also gained a couple of short halls; one from the kitchen to the new bathroom, and one from the kitchen to the basement and sunroom. Today’s post is about the first hallway to the bathroom; a short and quiet little cul-de-sac, if you will. If I was a room, I’d want to live at the end of this hallway because it doesn’t get much drive-by traffic and is shady and private. Maybe it’s more of a nook than a hall. In any case, it’s done (and maybe my favorite spot in the house right now.)

To get this hallway, we had to add a new opening in the kitchen wall.

That was then, this is now. 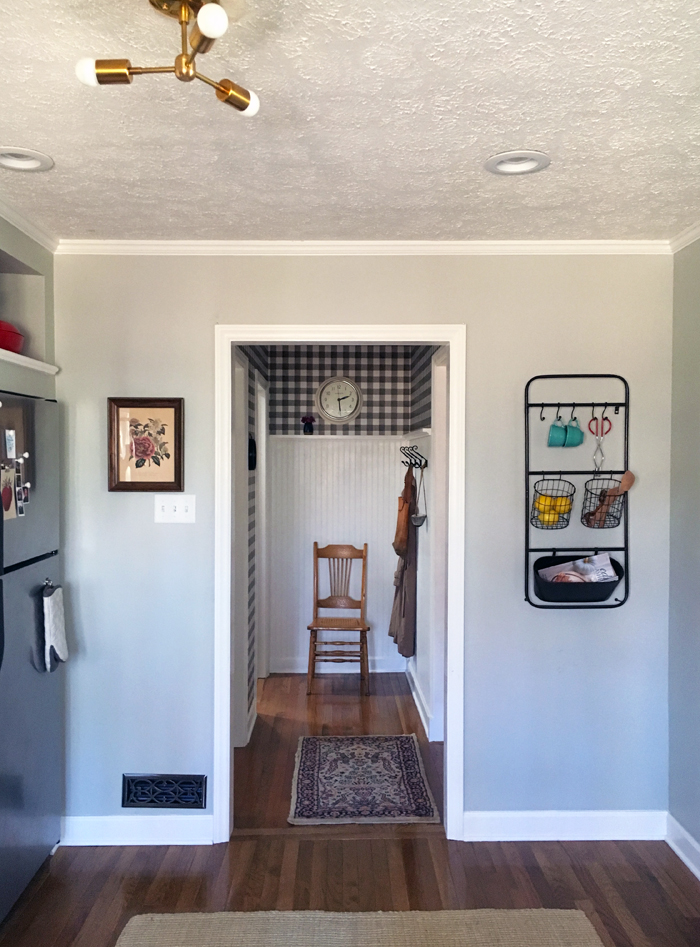 Much better. Consider this photo your peek into House Updates Part 2: The Kitchen, coming soon. *wink*

If you look at the gif video you can see a door back there. Originally we were going to make this hallway one of those direct highway type of roads that would take you all the way through that doorway and right into the bedroom hall on the other side of the house. But then we changed our minds during framing, and decided to put a wall there instead and make that existing door an access to a new linen closet. So, that would be on the opposite side of this wall: 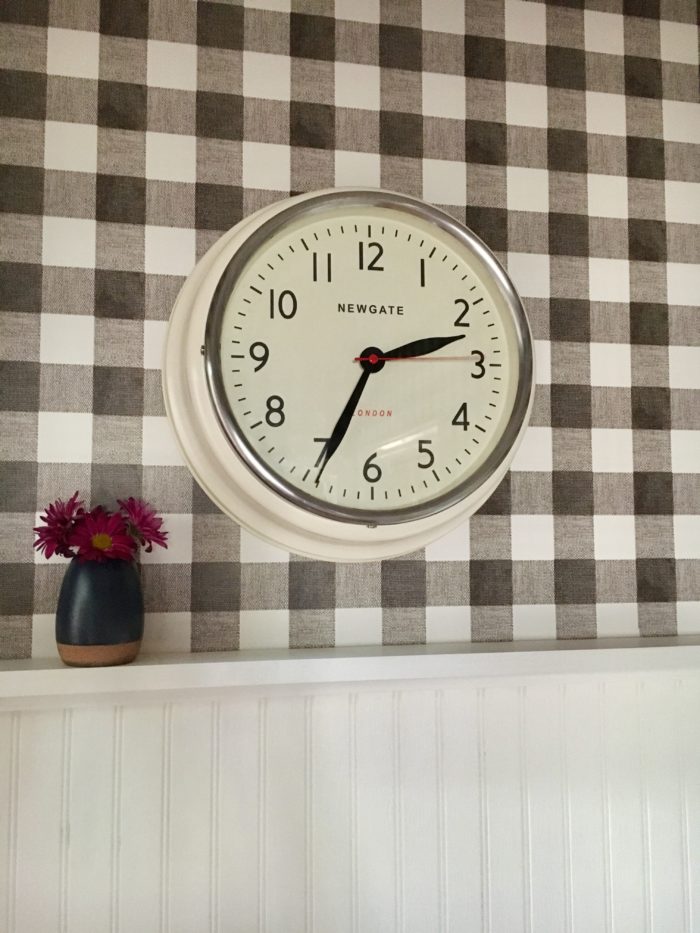 From the kitchen, I like that this is what I see instead of a long hallway to the bedrooms.

So, the wallpaper, right? I know, I like it too. It wasn’t a lot of wall space, so I thought, “Hey why not?” I found an inexpensive paper during Black Friday and hung it myself one weekend. I was hoping I could squeak by with one roll, but it turned out to take just over a roll. Oh well, now I have lots of extra paper to line some drawers. If wallpaper weren’t so expensive, I’d paper ev-er-y-thing.

Since we don’t have a proper entryway with a coat closet or a mudroom in our house, I thought this might be a nice opportunity to make this a little spot for hanging coats. 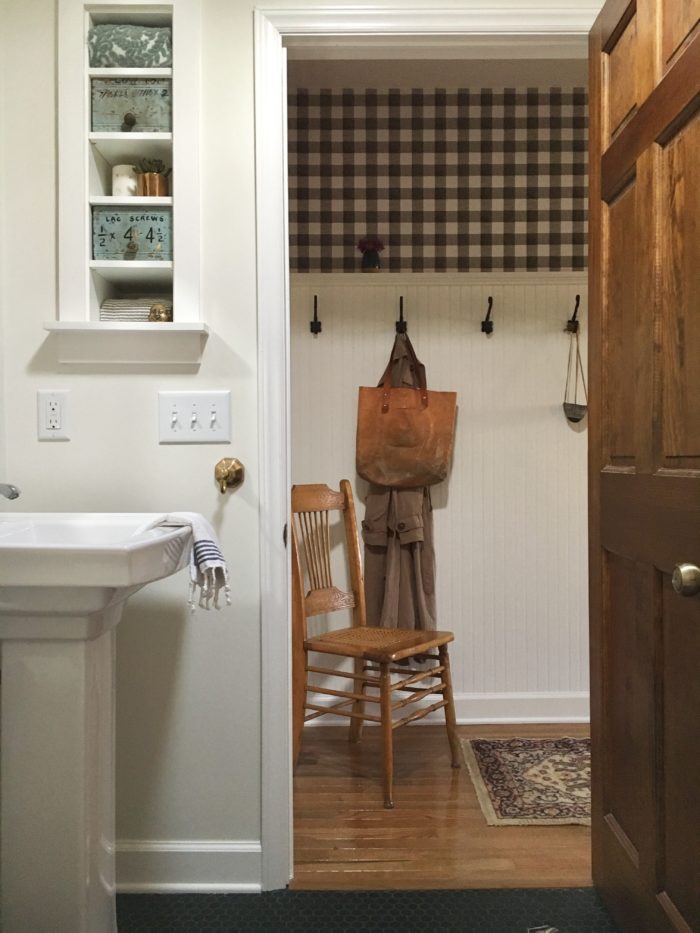 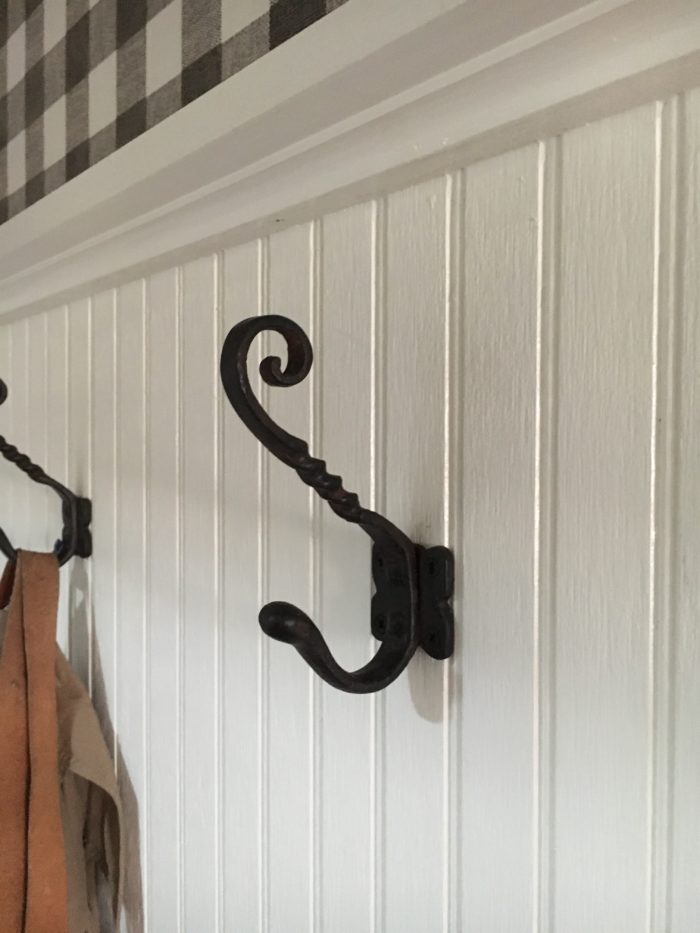 There’s an existing closet in this hallway that used to be where we hung coats, and before that it was the closet to the third bedroom when the house was originally built in the 50s. Now, it’s our pantry and a place to hang aprons, put recyclables, and store brooms.

We went with pine bi-fold doors for cost reasons and then I painted it an accent color. It’s Sherwin Williams “Classic Sand” which is the closest I could find in the SW deck to Farrow & Ball’s “Setting Plaster,” one of my favorite colors (refer to this post with more about that). And I simply replaced the knob with a prettier one. I’ve seen blog DIY’s on how to turn bi-folds into french doors. Maybe one day we’ll do that, but it’s great as-is. 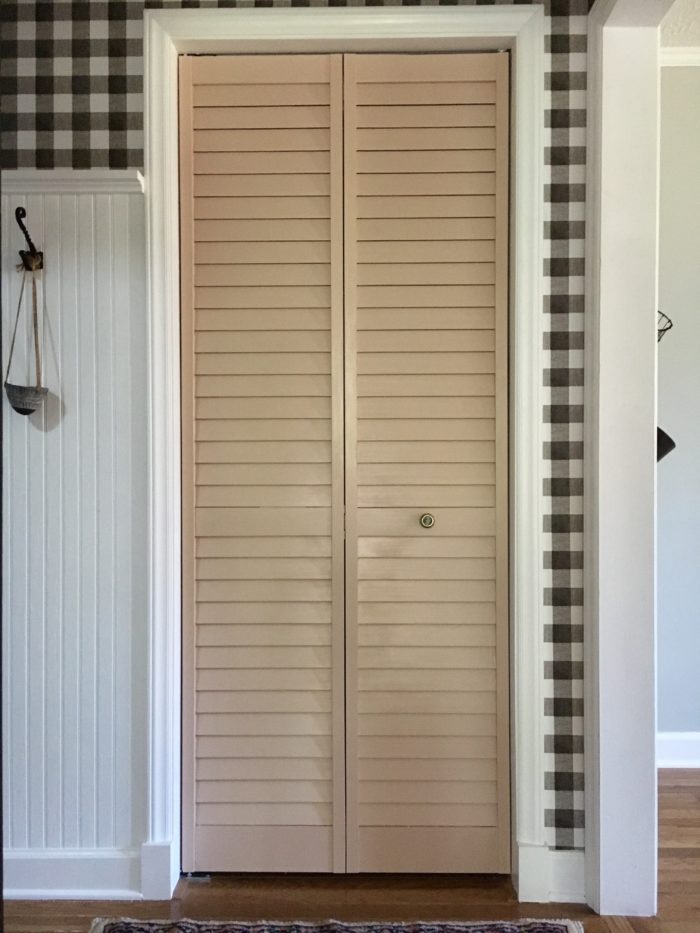 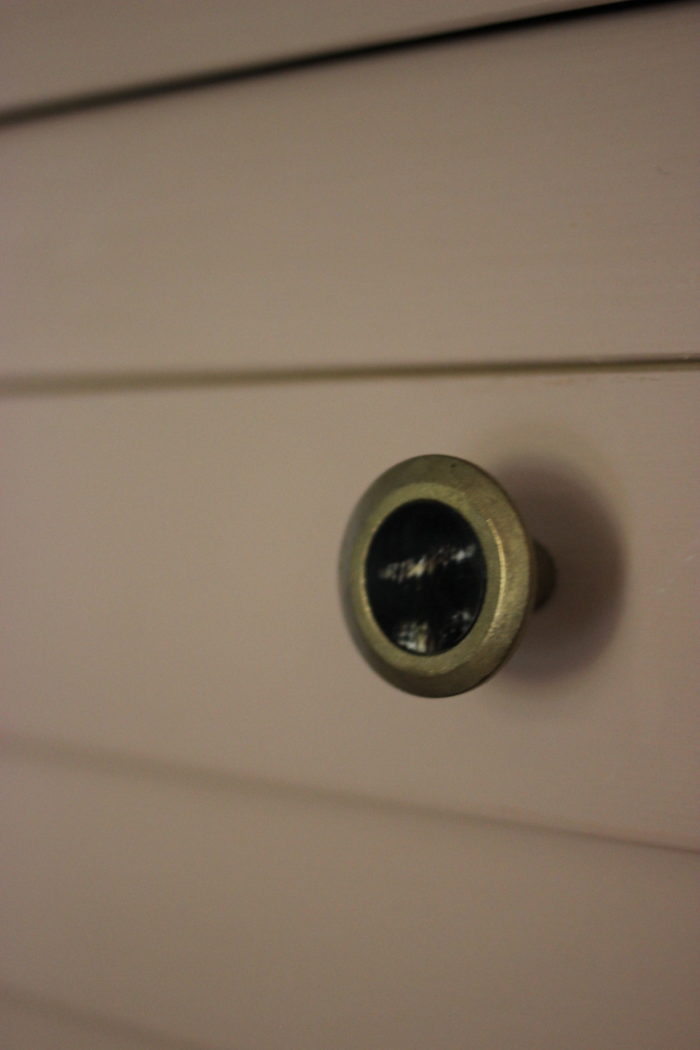 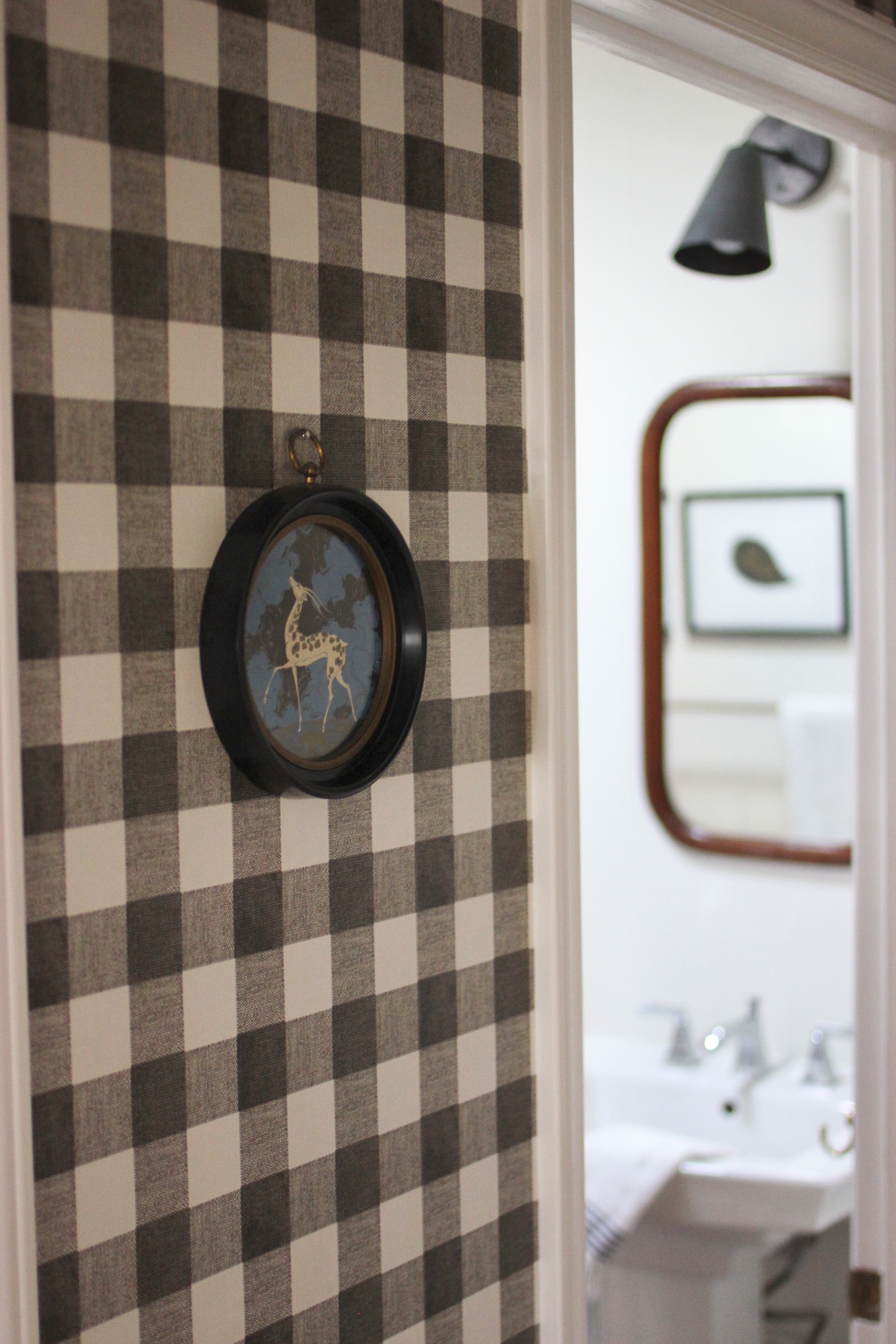 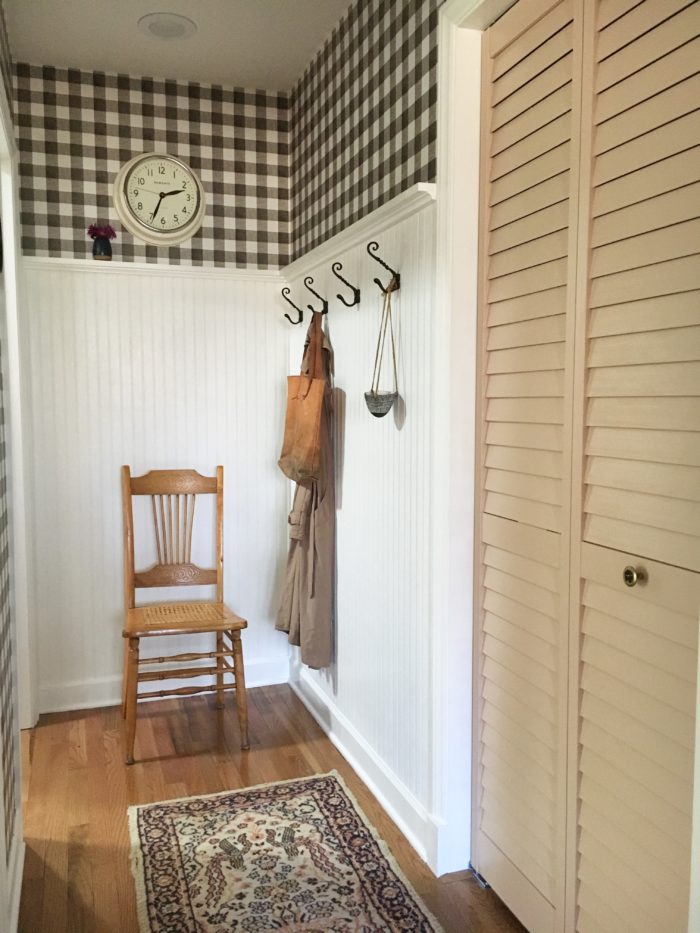 Everything is all new. New floors, trim, and two cans in the ceiling for lighting.

The next post will be on the kitchen updates so stay tuned.